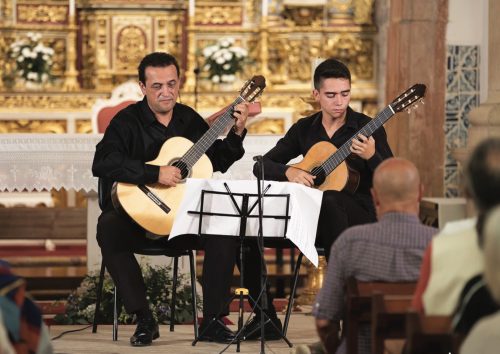 This guitar duo was born with the fusion of two generations, father and son come together in a project in which everything goes in the same direction, the same idea of interpretation and a very similar musical taste.
After its premiere at several festivals in Spain and Italy, they continue to work on this exciting project that unites the experience with the strength and enthusiasm of the youth, without a doubt, it will go on and on, as the good reviews obtained at the festivals predict in those who have participated.

He began to play the guitar at the age of three, at the hands of his father, at the Municipal School of Music “COMARCA EL CONDADO” in Santisteban del Puerto.
He completed the professional degree with Eduardo Sánchez and Francisco Cuenca, obtaining the highest marks. He is currently studying classical guitar at the Superior Conservatory of Music “Andrés de Vandelvira” in Jaén.
He has won several national and international awards.
He has received master classes from Mª Esther Guzmán, Takeshi Tezuca, Javier García, Antonio Duro, Gloria Medina y Andrés Huertas, among others.

The father has made international tours in more than twenty countries, in America, Asia and several countries in Europe. At the same time he has taught master class and has been part of the jury in several of these countries.
He shares the concertist task with the teacher, currently he works as a teacher and director of several musical education centers in the province of Jaén in Spain.